Don’t worry if you don’t understand this in a single shot, let’s get some hands-on experience and have fun doing this.

First, find below the basic structure one needs to visualize before understanding the concept behind ‘git codes.’

Starting from the Remote Repository, it can be either GitHub (or) GitLab; from there we clone it into our current working directory and if we want to make any changes in the corresponding clone files after making necessary corrections, we can revert it back to the remote repository which basically has two more stages: Staging and Local Repository.

Basic Commands and their description in Git:

These are the basic commands which we use on a daily basis.

Let’s start our journey by picking each and every command and try understanding how it will be implemented.

You can see the .git folder which is created in the hidden state.

Until now, we have created a directory and initialized our repo.

As you can see in the picture below, we try to clone the data from github repo to our current working directory. 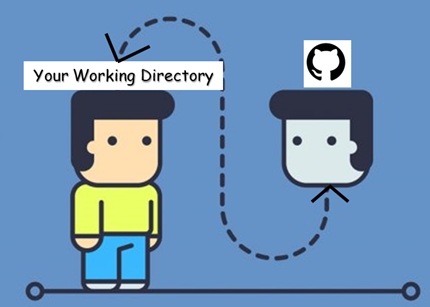 The https link needs to be copied and used along with our ‘git clone’ command.

This is how we can use the ‘git clone’ along with the https,

So, now all the files present in the corresponding repository have been downloaded into your current working directory.

With the ‘git add’ command, the necessary changes that you have made to your file can be directly added to your Staging area.  You will find all these staged files in the “D:current working directory/.git” directory which will be in a hidden state in your working directory.

To understand how to use this command, let’s first assume that we have a file pgm1.py and let’s make some changes to it. Using this command, ‘git diff file1/pgm1.py’ we are able to check changes in the “pgm1.py” file compared to the previous version.

Status command displays the state of the working directory and the staging area. It lets you see which changes have been staged, modified, non staged, untracked and those that are to be committed.

So, if the ’git add’ is skipped, we will see the above error,

So, till now you have committed the changes and stored them in the local repository. Now, you need to push them back to the remote server from where you have cloned.

By using this command ’git push’ you can successfully push your modified work from the local repository to the remote repository.

Let’s get our hands dirtier by using a few more commands. Don’t miss reading this blog until the very end.

‘git branch’ is the command used to create a new branch.

By default,  you’ll be working under the main branch. So, here in the command to create a new branch having the name ’new_branch1’ is created.

‘git checkout’ is the command used to switch from the current branch to the branch you are interested in.

This command merges the specified branch’s history into the current branch.

This command unstages the file, but it preserves the file contents. So it can be shown as modified in git status.

This command deletes the file from your working directory and stages the deletion.

This command is used to list the commit details for the current branch.

This command fetches and merges changes on the remote server to your working directory.

The ’git stash’ command removes your uncommitted changes (both staged and unstaged).

By reading this blog, you not only have a good idea on how to connect the working directory with the remote repository and vice versa, but also have learned most of the basic commands that we use in the git environment. Hope you have enjoyed the first blog in this ‘Getting Started with git’ series. Let’s catch up again in part 2 – ‘Github for beginners’ 👋.

One Reply to “Git commands for Beginners”

PowerBots in PowerArtist for Early-Power Analysis and Reduction: An Introduction
MLOps – ML Production Revolution
Ignitarium’s position as a key engineering service provider for Semiconductor, AI and Automotive domains is recognized by Zinnov Zones ratings 2021
Network on Chip – an Overview
Enabling safety in workplaces with mobile robots using Virtual Fencing
Real-time Noise Suppression | Webinar Recording
We use cookies on our website to give you the most relevant experience by remembering your preferences and repeat visits. By clicking “Accept All”, you consent to the use of ALL the cookies. However, you may visit "Cookie Settings" to provide a controlled consent.
Cookie SettingsAccept All
Manage consent

This website uses cookies to improve your experience while you navigate through the website. Out of these, the cookies that are categorized as necessary are stored on your browser as they are essential for the working of basic functionalities of the website. We also use third-party cookies that help us analyze and understand how you use this website. These cookies will be stored in your browser only with your consent. You also have the option to opt-out of these cookies. But opting out of some of these cookies may affect your browsing experience.
Necessary Always Enabled
Necessary cookies are absolutely essential for the website to function properly. These cookies ensure basic functionalities and security features of the website, anonymously.
Functional
Functional cookies help to perform certain functionalities like sharing the content of the website on social media platforms, collect feedbacks, and other third-party features.
Performance
Performance cookies are used to understand and analyze the key performance indexes of the website which helps in delivering a better user experience for the visitors.
Analytics
Analytical cookies are used to understand how visitors interact with the website. These cookies help provide information on metrics the number of visitors, bounce rate, traffic source, etc.
Advertisement
Advertisement cookies are used to provide visitors with relevant ads and marketing campaigns. These cookies track visitors across websites and collect information to provide customized ads.
Others
Other uncategorized cookies are those that are being analyzed and have not been classified into a category as yet.
SAVE & ACCEPT